TO FIGHT ALONGSIDE FRIENDS 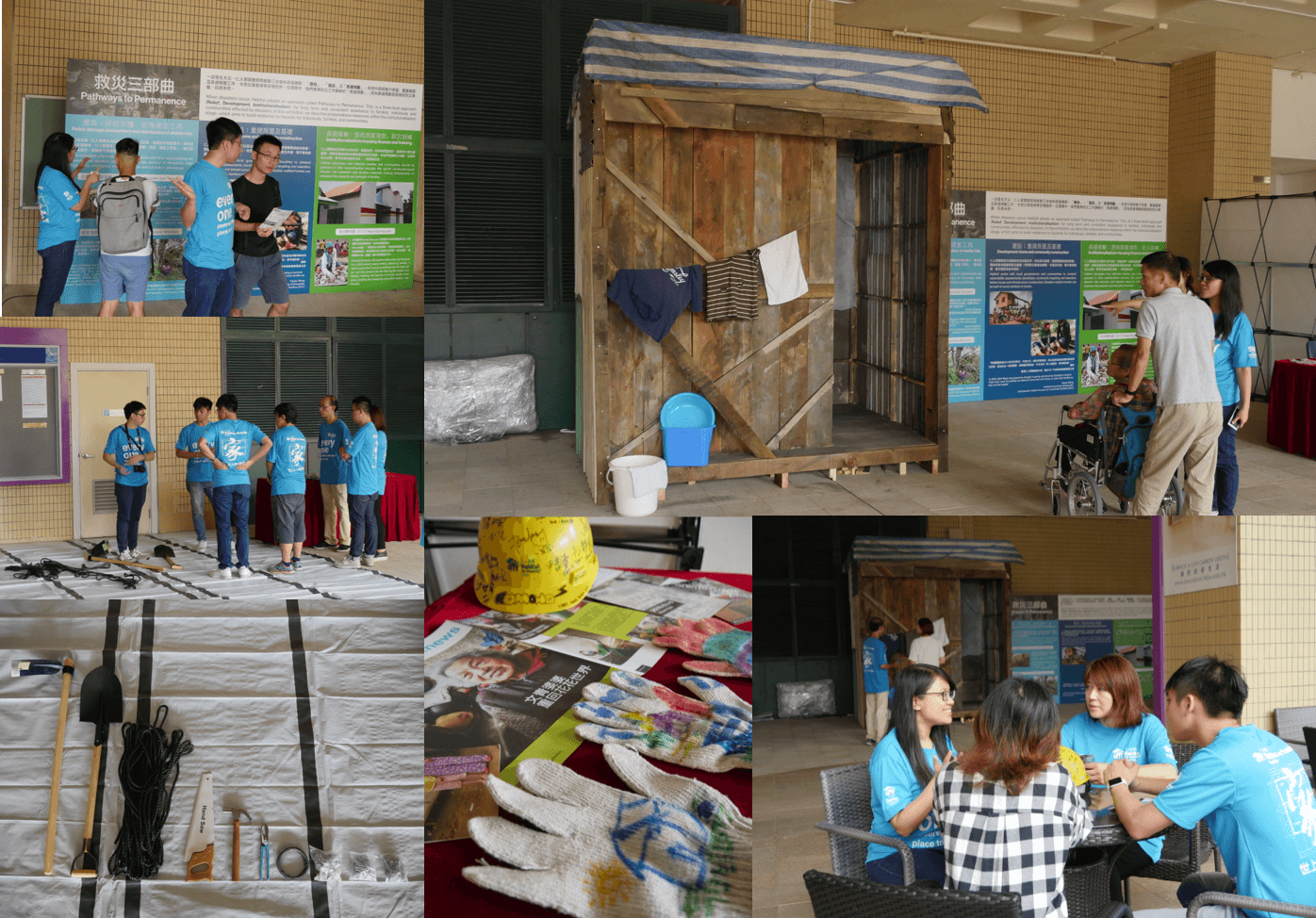 Due to the devastation of typhoon Mangkhut, we realize that the natural disaster not only happens in developing countries but also in international cities.

Habitat for Humanity, making an impact across the Asia-Pacific Region and over 70 countries, is dedicated to raising awareness of the need for decent, affordable housing and harnessing resources to improve living conditions for the affected families. The vision of the Habitat is “A world where everyone has a decent place to live”. In celebration of World Habitat Day on 1st October 2018, the outreach 5-day Disaster Response Exhibition was launched in Baptist University. It showcased the post-disaster operations and a model of the metal shack, where the participants could go inside so that they would have a better understanding of the lives of those people living in such temporary shacks.

Social Career recruited 10 volunteer docents to assist in this 5-day Exhibition for Habitat. Before the event, all volunteers were required to attend a briefing about the concept of home building and basic knowledge of the post-disaster operations. In the exhibition, they were supposed to promote the core values of the Habitat for Humanity and the concept of the three-level approach – the post-disaster operations should be consistent assistance to families, individuals and communities affected by the disaster in long term.

Jeffery and Emily were two of the volunteers. Having suffered from Mangkhut devastation, they realized that even though Hongkongers raised the different types of supporting and donations for the overseas storm’s victims, everyone’s in the same boat – no-one could definitely get rid of natural disasters. There was nothing else people could do in the disaster. Thus, the important role of volunteers played in working with families in need, as well as the positive impact volunteering could have on the volunteers themselves.

Some volunteers shared their overseas experience that there was nothing more gratifying to them than to receive one of the positive feedbacks from disaster’s victim. They believed “the truly valuable is the smile doesn’t cost a penny”.

The theme of the exhibition focused on what the roles of the disasters’ victims play. Some people might question why the Habitat distributes shelter kits instead of tents to the disaster’s victims during the 72-hour “golden window”. They explain that those kits are able to be reused many times by the local and they also hope the affected families learn how to build their own homes – the disasters’ victims ARE EMPOWERED to use their new skills to increase their earning. That is to give others a hand-up, not a hand-out.

“Partnership Housing” is the concept raised by the Habitat. It centers on those in need of adequate shelter working side by side with volunteers to build simple and decent houses. In Hong Kong, the overseas programme the Habitat Young Leaders Build will be launched in 2019. Besides of the above programme, Habitat Hong Kong also takes part in the annual Habitat Young Leaders. On 1st December 2018, around 150 volunteers were recruited to clean the schools and public estates. In addition, the local Project Home Works provides elderly residents with a clean-up service each weekend in Hong Kong.

About Habitat for Humanity

Habitat for Humanity has been established in the United States since 1976. Nowadays, the Habitat is a global non-profit housing organization working in more than 70 countries around the world. It helps 9.8 million people to build or improve a place they can call home. The Habitat Hong Kong carries out the Project Home Works which provides a hand-up to low-income families, the elderly and the disabled through home repairs. Under this project, around 200 local families get benefits every year in Hong Kong.